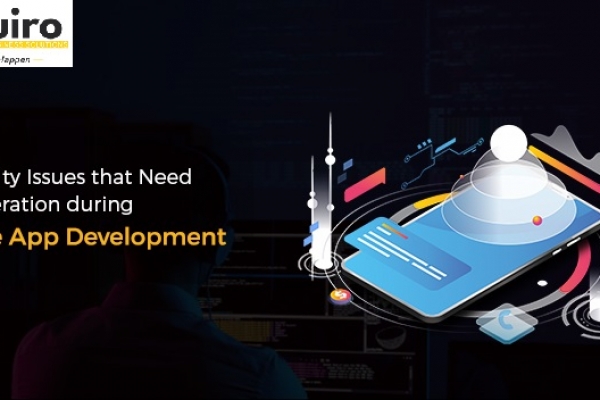 A number of apps release every single day on the Google Play Store and the fact is most of them carry vital user information. Having user information in it makes these apps more vulnerable to hacker attacks who look for any loophole in apps. If they find one they’re going to hack it and phish user information or implant malware in it. There’re different security concerns that need to be addressed by the mobile app development company in India.

Mobiles are known to be more vulnerable to most of the security breaches since it is quite easy to access the cached information stored on a phone. Mobile app developers should develop an app utilizing a smart cache cleaning cycle that works automatically or is password protected.

#3 Not Carrying Out Security Thoroughly

A mobile app developer is responsible for carrying out security checks thoroughly and should take appropriate measures to fix vulnerabilities. From time to time, we have seen developers releasing their app in beta mode leaving users at a data security risk. This is why developers need to test the app properly checking every aspect before its release.

#4 Weak or No encryption

Encryption plays a vital role when it comes to blocking hackers from attacking the phone of different users and even the servers. Remember that with technology getting advanced hackers are well-equipped so make sure encryptions also need to be upgraded. In the past, there have been some apps that stored user information in simple language and got hacked quite easily.

Hackers tend to start working on finding loopholes in your app post its launch. Once these loopholes get exposed you should start plugging these holes and update the users with immediate patches to help the restoration of the functionality of the app as well as the faith of users using it. It is better to fix every issue before its release because there’s no margin of error when you deal with users’ sensitive information.

Despite providing better security, apps get hacked from time to time. This is the result of lacking to provide server-side security and gets vulnerable to the attacks. Neglecting or compromising the security of the server-side can cause loss of sensitive user data such as credit/debit card information, personal identification information and much more. Just in case you are dealing and collecting a lot of user data then you must get a certified SSL (Secure Socket Layer).

So that’s it! Beware of the predators who are looking to get inside the loophole in your app. Make sure you’re checking every bit of security details before the app release. In case you’re looking to get yourself a mobile you can consider Acquiro Business Solutions Pvt Ltd for it. Being a mobile app development company, we are dedicated to delivering the best mobile app development services to clients with different security features within the country as well as abroad.

HOW TOHow to Transfer Music from iPhone, iPad or iPod to Computer

Benefits Drive-in by Custom ERP Solutions to Your Business

What is diffrence between Sales and Marketing?

What are the main differences between Sales and Business Development?

What are the main differences between the Reorder Level and Reorder Quantity?

How much does it cost to develop an online grocery delivery app?

Difference Between A Manual and A Guide?

10 Reasons Why Marketing Is Important To a Business

The organization Hiring process has changed In recent years as we’ve seen a massive shift towards online shopping, resulting in many

How will a digital HR transformation benefit your company?

No matter how you look at it, the workforce is changing. Not only is it becoming more diverse, but employers

Discover the leading recruitment strategies in 2021

Recruitment process is an integral part of any organization for running day to-day operations, Whether business is big or small.